Recently I picked up a collection of pieces I made while at Winthrop University, around spring 1999. Carlos Guerrero, studio mate and best pal and I collaborated on an independent study project with professor Alf Ward. 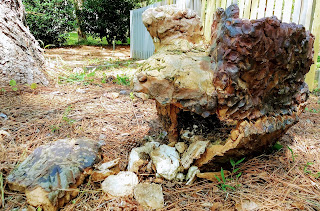 We mixed about 2000 pounds of red earthenware clay with lots of grog, a material made of recycled firebrick, with little specificity to how it was going to work or fire. We threw in corn I remember along with who knows what else. Somehow we moved it all into the 10 x 13 foot studio we were assigned in the basement of McLaren Hall.  We worked outside of our usual pottery work, making into the night. We built a simple boat form upside down that took up the entire length of the studio. Once we finished it was time to cut it apart into sections, flip it over and begin drying it to prepare to fire. When we cut it open, looked inside and saw that some of the corn had sprouted. It was growing in complete darkness. The sprouts were translucent. Ghostly in a way. 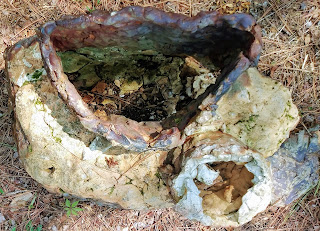 At the time we were both firing in a soda/salt kiln, soda mostly. At 2300 degrees Fahrenheit we would prepare a solution of soda ash and water and spray it in the kiln chamber through ports using a garden pump sprayer outfitted with a metal tip. Our ambitions soon hit the wall of physics. The sections began to fall apart, unable to hold their form or weight. We cut the entire piece into sections, piled them in the middle of the floor, covered the mountain of wet clay with plastic. We left to go to the NCECA clay conference in Columbus, OH that year. We didn't know where to go from here. We would meet with Alf occassionally to discuss everything but what we were working on. He tell us stories of growing up in WWII London, designing jewelry, and about his life as an artist.  We were were setting our course for other places. Alf was our sage captain. 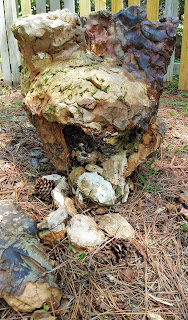 After returning from NCECA set out on making smaller pieces from the slabs.  We worked together. We also worked apart. All the while not knowing what the next step was going to be. We knew how we wanted to fire them and we had a show date to make. We made our own tools, cut folded, mashed, attached and collaged to build forms. We added white clay to our palette. 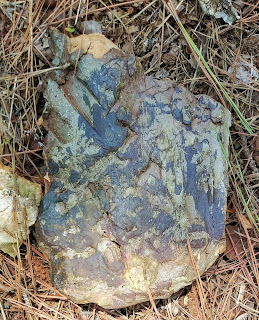 One Saturday morning we threw out clay on 2, 4 x 8 foot tables. The clay was a white stoneware. The clay was known as a flashing clay body.  The flame path in the kiln would mark the clay with patterns and color in unpredictable, unique ways.  The happenstance of the firing became as much of the piece as the forms. The granola-like clay had a life all it's own. We walked on it, mashed it, hit it with broom handles and bricks. Then we cut it apart and made around 100 pieces to use to arrange with the larger pieces in an outdoor installation. 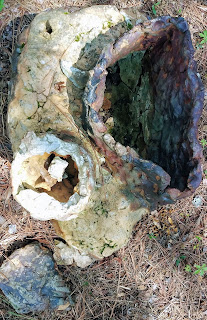 As the time drew near to set it up we used my red Ranger pickup to scavenge the rail road tracks for materials, objects and pallets. We used those to stack and place the larger pieces on outside our studio building. Jim Connell, our ceramics professor was so supportive of our project. We were shocked when he offered to host the reception along with his artist/wife Paula Smith. 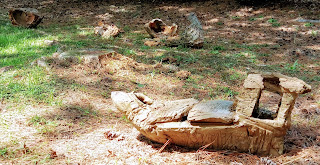 For the past 22 years they've been in the woods along a walkway at my parents house in the mountains of South Carolina. We loaded my truck with them a few weeks ago and brought them to our house and arranged them in our side yard. They make me smile not for nostalgic reasons but in what the objects continue to be. I don't know yet if I feel this way because they have changed or I have changed or both. Soil has formed from fallen leaves in nooks and crannies. Tree roots have found their ways into interstitial spaces | liminal space between then and now. Forces as potent as our hands and fire continue to form them. They will be here long after our we move on. They relate to one another in ways I wish we all still did. On the best days I hope to get close to those conversations once again. 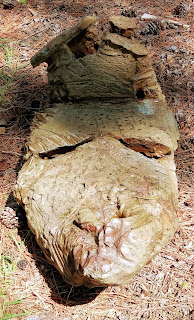 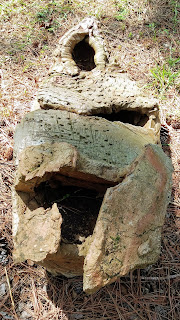 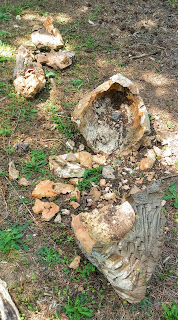 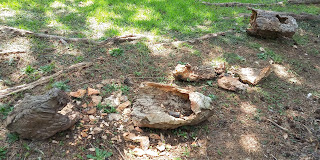 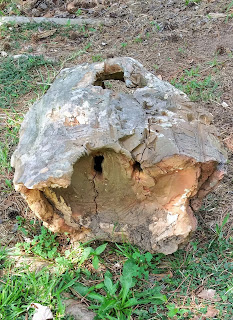 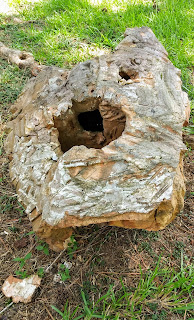 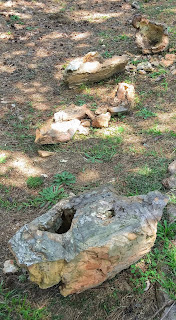 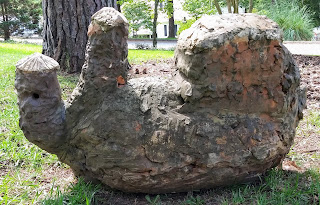